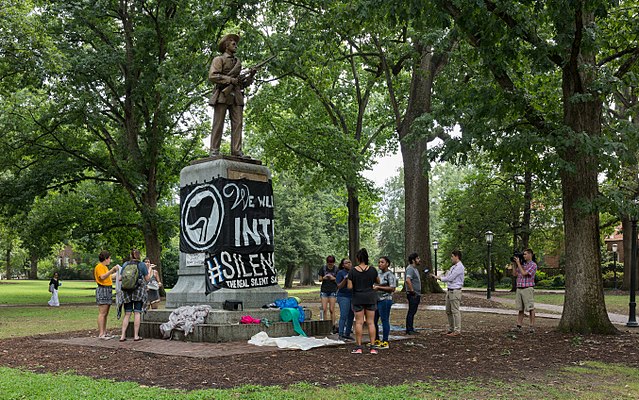 Today’s protest-ridden climate on college campuses might lead one to suspect that they are hotbeds of political disruption controlled by social justice warriors.  All over the country, speakers are shouted down, professors are harassed and even assaulted, students are intimidated—while administrators grovel, patronize, pander, and quake.

Fortunately, the situation isn’t quite so dim on most campuses, or, at least, it doesn’t need to be. Administrators may be learning that order and free speech rights must be preserved and that appeasement only emboldens troublemakers. Furthermore, ideologically driven protesters usually constitute a small minority of the actual student body.

A look at a three-day period at the University of North Carolina at Chapel Hill reveals many different facets of the Trump-era campus protest phenomenon.

On November 13th, roughly 55 protesters gathered outside a speech by former deputy assistant to President Trump Sebastian Gorka. The protesters ranged in age from undergraduates to senior citizens. At some point, however, many undergraduate students (mainly female) left; the 30 or so who remained were older, more male, and more “hardcore.” Some belonged to the Democratic Socialists of America and were at times raucous, even menacing.

The following day, about 150 protesters held a rally to demand the removal of a controversial confederate statue known as Silent Sam. As it was erected in honor of fallen Confederate soldiers, many claim that the statue’s mere presence on campus reaffirms racism and white supremacy.

Finally, on Wednesday, November 15th the UNC-Chapel Hill Board of Trustees hosted a public forum to allow individuals to “express their thoughts” regarding the monument. The majority of the nearly 30 speakers demanded that the statue be taken down (again deriding the opposition as racists and white supremacists).

Those events raise two major issues. The first is how the university handled the protests: did they maintain order and preserve free speech? The second concerns the character and intentions of the protesters: are they willing, or even capable, of listening to reason? Are they unrealistic or unhinged? Or are they merely looking to cause a commotion?

And, although protesting different issues, it appeared that demonstrators at both the Gorka and Silent Sam events shared a great deal of overlapping arguments and rhetoric. Perhaps there is an underlying political agenda for which Sebastian Gorka and Silent Sam are mere props? And are the protesters representative of the student population as a whole?

As to the first question of how the university handled the protests, it appears that it did extremely well. All three events were almost entirely problem free.

Despite the protesters’ oft-excessive passion, they did not interrupt Gorka’s speech, the Silent Sam protest, or the public forum. Indeed, it seems that the university’s newly implemented free speech policy has so far proven to be effective: Participants at both the public forum and within the auditorium where Gorka spoke were warned that anyone who substantially interrupted the event would be subject to university disciplinary action and possible arrest, and would be escorted out of the building.

Other precautions also may have contributed to the civilized atmosphere. Attendance at the Gorka event was limited to enrolled students, registered guests, and faculty. The protesters freely vocalized their objections in a separate space—as it should be. Ample police were on hand to deal with the 30 protesters, no matter how intent on causing mayhem they were. It was a far cry from seven years ago, when former US congressman Tom Tancredo was chased off the UNC campus by rampaging radicals, partly because of inadequate policing.

Police have also closely monitored the Silent Sam protests. Because of protesters’ heightened emotions and occasionally heated confrontations with counter-protesters, the school employed an undercover police officer. Although the decision to use undercover surveillance was met with accusations of having “spied” on students, it may be that UNC-Chapel Hill is taking necessary strides toward preventing future violence.

There are certainly signs indicating that the protesters are unreasonable. Despite their insistence that the university take the statue down, the school is powerless to take such action due to a 2015 law that prohibits the removal of historical monuments from public grounds unless they pose a structural danger to physical safety or if given express permission from the North Carolina Historical Commission.

Furthermore, the protesters ascribed nefarious motives to chancellor Carol Folt and other administrators, implying that they are either racist for allowing the statue to stay, or that they care more about appeasing the university’s “rich donors” who presumably are in favor of keeping the statue. Yet university officials have repeatedly stressed their desire to remove the statue for “public safety” reasons.

At times, protesters even appeared to be unmoored from reality. Speakers at the Silent Sam public forum contended that the statue threatens students’ mental and physical health. One teary student from the school of medicine claimed that just walking past the statue could raise a student’s blood pressure to dangerous levels. She asserted:

The continual presence of this monument on campus is a threat to the safety and well-being of students and that it is dangerous to public health…multiple research studies have shown that exposure to racism…causes physiological harm on the body. Blood pressure rises [and] stays elevated throughout the day. This isn’t a matter of hurt feelings; this is very literally as serious as a heart attack.

The protesters also have a dark edge. For example, one of the Gorka protest leaders, who declined to give either his name or affiliation, said that the chant “Every nation; every race; punch a Nazi in the face,” was meant literally. “It’s a proven political practice,” he explained. “If you punch a Nazi today, you may not have to fight a war later.”

The real problem is with his definition of who is considered permissible to punch for being a Nazi. When asked whether it was okay to punch Gorka, who resolutely denies having Nazi beliefs, the protester said that he believed there was a large body of evidence that he was, making him acceptable to assault.

When pressed further about where the line is drawn for somebody whom he suspects of being a Nazi but for whom there is not much evidence supporting his suspicion, he asked for a specific example. Of President Trump—for whom there is no evidence of any Nazi affiliation and considerable evidence that such a supposition is unlikely (such as his warm acceptance of his daughter’s conversion to Judaism)—he sardonically suggested and affirmed: “if it smells like…if the shoe fits.”

And at the Silent Sam protests, large groups encircled the statue and repeatedly shouted a quotation from Assata Shakur, who is on the FBI’s most wanted list for the first-degree murder of a police officer.

What, then, are we to make of protesters who suggest that mere suspicion of somebody’s political beliefs is enough to justify assaulting him or her? Or who identify with violent, cop-killing revolutionaries?

It only takes a small—but loud and aggressive—group to attract disproportionate attention and place administrators in deferential straitjackets.

Is it politics or principles that are really driving the protests? At the Gorka protest, a UNC-Chapel Hill law student affiliated with Democratic Socialists of America revealed that politics was indeed her basis for permitting speakers on campus. Angela Davis—a communist revolutionary—was to her an acceptable speaker, unlike Gorka: “She [Davis] is not a Nazi.” When reminded that Davis was involved with the Black Panthers at a time they were committing numerous murders, she merely stated: “We like the Black Panthers.”

As for whether an overwhelming majority of students want to “silence Sam,” further prodding suggests that most students are not particularly opinionated on the issue. On the contrary, when the Martin Center informally surveyed 26 UNC-Chapel Hill students regarding their thoughts on Silent Sam, the majority expressed neutrality or mild concern—not exactly matching the protesters’ zealous plea to “tear it down!”

Nevertheless, as seen elsewhere, it only takes a small—but loud and aggressive—group to attract disproportionate attention and place administrators in deferential straitjackets. Today’s protesters are extreme, unhinged, and threatening; it is little wonder that police officers must be prepared in case of an outbreak of violence—especially given the words of warning the protesters directed toward university officials: “This is Silent Sam’s last semester!” or “white silence is white violence!”

UNC-Chapel Hill should be applauded for taking precautions to prevent violence—while, at the same time, protecting students’ right to free speech and giving them a forum to air grievances. Still, the school must remain vigilant and administrators must firmly hold their ground and avoid the temptation to capitulate to the protesters’ excessive demands.

If the latest national trends in student protester movements indicate anything, it is that small pockets of angry students are growing increasingly influential in their ability to shape university policy. And remember that the protesters are a tiny minority that includes hardened radicals with a political agenda that extends far beyond the campus.

A Conversation with the Chancellor of NC State University