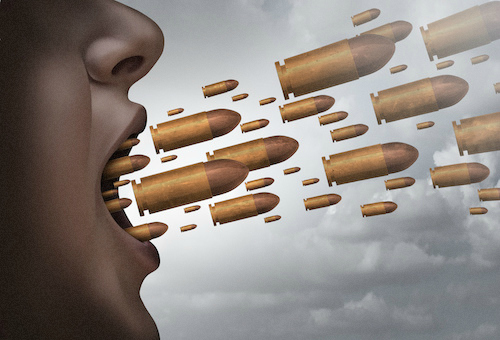 The excuse we have often heard for raucous campus protests over the last few years is that they are justified as a way of countering the “violence” of speakers like Milo Yiannopoulos and Charles Murray. To prevent them from speaking is, according to this line of argument, using mere sound to eliminate the actual harm that the words of such individuals would do to vulnerable members of the campus community.

You might be inclined to dismiss the notion that words can be violence as one of those ideas so absurd that only an intellectual could believe it. In that case, here is the intellectual you’re looking for—Professor Lisa Feldman Barrett of Northeastern University.

In her recent New York Times article entitled “When Is Speech Violence?” Barrett contends that speech that “bullies and torments” ought to be prevented because “from the perspective of our brain cells,” it is “literally a form of violence.” She points to scientific findings showing that “Words can have a powerful effect on your nervous system. Certain types of adversity, even those involving no physical contact, can make you sick, alter your brain—even kill neurons—and shorten your life.”

Professor Barrett is a respected psychologist and she cites studies in neuroscience that support her statement that verbal abuse can bring on stress that causes physical damage. Let’s not question the science she cites. Let’s agree that she is correct in saying that chronic stress is bad for an individual, perhaps even life-shortening.

The problem is that there is no apparent connection between chronic stress and merely listening to someone speak, for a while, no matter how provocative his words may be.

Professor Barrett’s data pertain to studies showing how prolonged stress undermines health, but what does that have to do with the short-term exposure to a speaker who says things that are, for some students, upsetting? Her data just don’t lead to her conclusion that college students must be protected against certain speech.

In fact, her own words undermine the case for protecting students against speakers who make upsetting arguments:

Offensiveness is not bad for your body and brain. Your nervous system evolved to withstand periodic bouts of stress, such as fleeing from a tiger, taking a punch, or encountering an odious idea in a university lecture. Entertaining someone else’s distasteful perspective can be educational. When you’re forced to engage a position you strongly disagree with, you learn something about the other perspective, as well as your own.

John Stuart Mill would have agreed completely. He maintained in perhaps his most famous work, On Liberty, that it is good for the mind to counter ideas that it finds disagreeable, even outrageous. It is healthy mental exercise to have to think through your reasons for opposing another person’s argument. And sometimes you find that your own position has some holes in it.

But after making the sensible point that offensiveness isn’t necessarily bad for a person, Barrett makes an unjustified leap, stating that a line can and should be drawn between speakers who challenge listeners with debatable ideas and those who just speak hatred and abuse.

In the former camp she puts the well-known scholar Charles Murray (although decried as a person who spews racial hatred by the Southern Poverty Law Center; see Murray sparring with SPLC here), and in the latter, Milo Yiannopoulos. Of Yiannopoulos, Barrett writes that he is “part of something noxious, a campaign of abuse.”

We will come back to her blurry line between acceptable and unacceptable speakers, but the immediate problem with Barrett’s thesis is that even if a speaker gives the listeners nothing but undiluted hatred (let’s say advocating arresting all Muslims and putting them in internment camps indefinitely), that doesn’t mean listeners would be physically harmed by such a talk.

That’ s a point that Jonathan Haidt and Greg Lukianoff make in their rejoinder to Barrett in the Atlantic, “Why It’s a Bad Idea to Tell Students Words Are Violence.” They observe that in calling for schools to prevent “harmful” speech, she has forgotten “the contrast between short- and long-term stressors.” A campus talk, they note, is over in less than two hours and any student feeling traumatized could walk out at any time.

There’s no chronic stress from any kind of campus talk. The science Barrett relies on provides no reason to keep even the most extreme of speakers away. All she has done is to validate, Haidt and Lukianoff write, “a new set of ideas on campus [that has] taught students to see oppression and violence wherever they look.”

And now back to Barrett’s example of a speaker who is so terrible that he should be kept from speaking—Milo Yiannopoulos. He seems to be more of a gadfly than a scholar, someone who enjoys zingers like, “The only reason people become feminists is because they’re physically unattractive.” That was among the lines he was able to get off at a talk at DePaul University last year before the event was disrupted by student activists.

In a Chicago Tribune column published right after that, Eric Zorn wrote of Yiannopoulos’s taunts, “He says them in a devilishly clever way, a way designed to provoke indignant overreaction from the left and shocked delight from the right.” What is harmful to one’s well-being in listening to some of that? And why would it be any worse than listening to a provocative speech by a far-left Democrat declaring that Trump and his supporters are fascists?

Barrett’s case in favor of preventing some campus talks because they supposedly cause physical harm is not at all persuasive. The trouble is that it doesn’t have to be persuasive to have an impact.

Next fall when colleges are again hosting speakers, we can expect campus activists who like excuses for blocking those who oppose their “progressivism” to quote Professor Barrett: “Words can be violence.” They won’t bother themselves with her distinction between speakers who are scholarly enough to host and those who are too “noxious” to tolerate. Any speaker who challenges leftist beliefs will be fair game for the “speech is violence” objection to his presence on campus.

By lending a scientific veneer of respectability to the notion that words are weapons, Professor Barrett has undermined the already weakened foundations of free speech and robust debate.