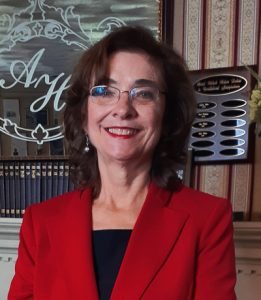 On Wednesday, February 23, the Martin Center welcomes Dr. Mary Grabar to discuss her latest book, Debunking The 1619 Project: Exposing the Plan to Divide America. In her book, Grabar, shows just how full of flat-out lies, distortions, and noxious propaganda the “1619 Project” really is. It is essential reading for every concerned parent, citizen, school board member, and policymaker.

Mary Grabar was born in Slovenia when it was still part of the Communist Yugoslavia and grew up in Rochester, New York. She earned her Ph.D. in English from the University of Georgia in 2002 and taught at a number of colleges and universities in Georgia until 2013.

While teaching, she wrote widely on political, cultural, and educational topics, and founded the Dissident Prof Education Project, a nonprofit reform initiative.

In 2014, she moved to Clinton, New York, and became a resident fellow at The Alexander Hamilton Institute for the Study of Western Civilization.