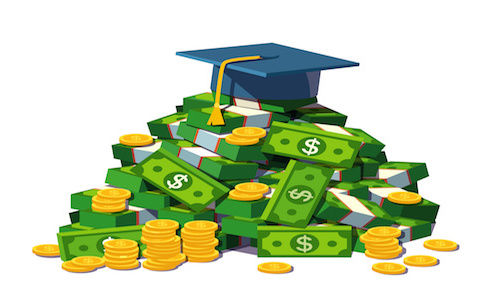 When politicians and Education Department bureaucrats began designing policies to lessen college students’ federal loan burdens, they weren’t concerned much with the cost to the taxpayers. Their imperative was coming up with popular and ostentatious ways of helping indebted students; exactly how much doing so would drain the Treasury was of little consequence.

At the urging of Senate Budget Committee Chairman Mike Enzi, the Government Accountability Office (GAO) undertook an analysis of the probable costs of the government’s various loan repayment and forgiveness programs. The GAO’s report was released on November 30. It concludes that the cost of the programs can’t be calculated exactly, but will be more than twice what had been originally expected for student loans made in the years 2009-2016.

According to the GAO’s estimate, the current student loan forgiveness programs will cost the government at least $108 billion. It could be higher because the Department of Education has been aggressively promoting such programs. If the government’s outreach efforts “succeed” in increasing enrollment, the costs will rise significantly.

In the last three years, enrollment has tripled in the government’s two programs that lower students’ monthly payments and can wipe out their debt balance after as little as ten years (if they work in a “public service” job, which covers roughly 25 percent of the labor force) or twenty years for jobs in the for-profit sector of the economy. For most students, lower payments combined with the prospect of forgiveness is a nice deal and few politicians can resist such seemingly cost-free generosity.

Nor is there reason to anticipate much if any change in policy under the Trump administration. During the campaign, Trump voiced support for helping students with loans by proposing a cap on monthly payments at 12.5 percent of income as well as a 15-year forgiveness policy. He’s likely to push for something from Congress so he can say he carried through on that.

Moreover, there are bills in Congress that would make the system easier and more generous toward student borrowers.

One is the SIMPLE (Streamlining Income-Driven Manageable Payments on Loans for Education) Act, which has bipartisan support in the House. It would automatically enroll a student in income-based repayment once he or she misses a payment. Another is the Student Loan Tax Relief Act, which would change a feature of the income tax code. Currently, when a student benefits from loan forgiveness, the amount is treated as taxable income, but not if the student received debt elimination under the Public Service Loan Forgiveness program. This bill would eliminate the tax on forgiven student loans.

The sad truth is that all of the momentum is toward making the federal student loan system less burdensome for those who borrow for college. One would think that we’d held a national referendum to identify our most pressing problem and reducing the burden of student loans came out on top.

But should it be so important? Among the sensible questions Sandy Baum asks in her recent book Student Debt is “Should subsidizing student borrowers be at the top of the social agenda?” Her answer is that it shouldn’t necessarily be since, she writes, “people owing educational debt are not the worst off members of our society.”

In fact, many student debtors who benefit from loan forgiveness are very well off. For example, some lawyers have cleverly played the system so as to get a large percentage of their loans for law school forgiven. They’re earning fine salaries in “public interest” work, yet escape paying for much of the cost of their education. (See “How Elite Law Schools are Offering Free Rides on the Taxpayers’ Dime” by Jason Delisle and Alexander Holt.)

Loan forgiveness is therefore a policy that subsidizes some people who are already well off, largely at the expense of people who are less well off. Almost no one regards that as sensible.

The bigger problem, however, is that our concentration on helping students pay off their loans distracts us from dealing with the fundamental cause of their debt trouble—the fact that so many Americans are lured into debt for dubious college education.

I recently wrote about that issue here, arguing that students need but seldom receive good counseling before they commit to debt for college. The old adage that an ounce of prevention is worth a pound of cure applies to the student loan issue. Rather than having the government help students who might be in over their heads with college (and grad school) debts, it would be far better to keep them from getting in trouble in the first place. (Too bad that almost no one in Washington is talking about that.)

The cost to society, after all, is not just the bad loans and forgiven amounts—it’s the resources that are devoted to failed education, including the time students devote to courses in which they learn little and the work of the faculty and administrators in teaching and overseeing them. The visible waste of bad and forgiven loans is just a fraction of the total waste we endure by subsidizing college.

When the GAO reports that the taxpayers are going to be giving away more than $108 billion on student loan forgiveness, it’s no doubt correct. That is a great deal of money that could be used for other priorities (or reducing our ever-expanding debt). The full cost of our student lending folly is, however, far greater.