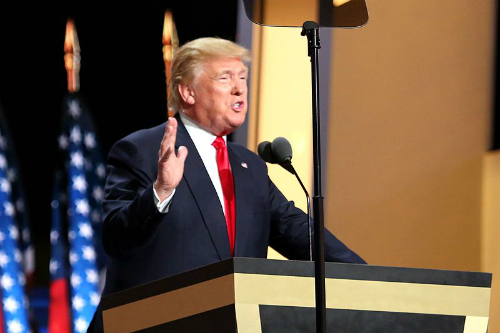 Last month I looked at Hillary Clinton’s higher education proposals in this Clarion Call, and found nothing to praise in them. They merely deepen the already ruinous federal involvement in subsidizing college.

Now it’s time to take a look at the higher education ideas that have been advanced by Donald Trump and the Republicans.

I will start with the Republican Platform even though it’s not clear how much the nominee is committed to it. Several pages are devoted to higher education.

The first issue raised is the problem of Title IX and its abuse by federal bureaucrats. “We emphatically support the original, authentic meaning of Title IX of the Education Amendments of 1972,” the platform states.

That provision, it continues, was intended to ensure that girls and women would have the same educational opportunities as males, but has been perverted to “impose a social and cultural revolution upon the American people by wrongly defining sex discrimination to include sexual orientation and other categories.”

The platform proceeds to attack the way Title IX has been used to “micromanage the way colleges and universities deal with allegations of abuse.” That’s a problem the Pope Center has often written about whereby federal officials strongarm schools into using one-sided procedures meant to maximize the chance of finding students accused of sexual assault (almost always men) guilty. (Here’s my most recent piece.)

Stopping federal officials, particularly in the extremely ideological Office for Civil Rights, from further imposing their will on American higher education through “interpretations” of the law is a worthwhile goal. The platform doesn’t specify exactly how that would be done, but I think it’s pretty obvious: A Trump administration would clean house at the Education Department.

This is another instance where personnel is policy and it’s hard to see how the personnel Trump might choose wouldn’t substantially rein in the Education Department’s overreaching agenda. That would be an immense improvement.

The GOP Platform also addresses the issue of college costs, noting that average debt levels per student have reached $27,000, and yet “over half of recent college grads are unemployed or underemployed.” The solution offered is “new systems of learning to compete with traditional four-year schools.”

Competition is unquestionably good and more of it would benefit young Americans who are often lured into college because they think their choices are either going to college or looking for a job in the shrinking sector of the labor market where degrees still aren’t mandatory.

But how do we get these new educational alternatives? The platform vaguely asserts,  “Public policy should advance their affordability, innovation, and transparency….” The one concrete idea advanced is to decouple federal financing from accreditation while empowering states “to allow a wide array of accrediting and credentialing bodies to operate.”

That is an excellent idea. The accreditation system does not guarantee high quality or even marginally good education. Back when the federal government made the fateful mistake of getting into the financing of higher education, politicians assumed that coupling eligibility for federal funds with accredited status would keep students from wasting their money on scams.

Unfortunately, that hasn’t worked—many students spend lots of federal aid dollars at accredited institutions where they learn almost nothing.

What the coupling of federal aid and accreditation does accomplish is to put a large barrier in the way of new institutions. Currently, the accreditation bodies enjoy a federally-protected cartel. Without this federal market guarantee, they would have to reinvent themselves so as to be worth what they charge for their services.

Finally, the Republican Platform advocates restoring private sector participation in student lending. Back in 2010, the Obama administration did away with the old Federal Family Education Loan Program under which private lenders made college loans, replacing it with direct federal lending. The Republican platform writers might have assumed that the old system was “free market” because the lenders were private, so restoring it would be a good move.

Sadly, the old system was no better than the present one. As Preston Cooper of Manhattan Institute explains in this piece, “Taxpayers bore all the risk, so lenders had no incentives to weed out poor-quality colleges. Predetermined interest rates eliminated any possibility of competition based on price…. Reverting to the old system would change little but the optics.”

What about Trump’s own website? To this point, the only educational issue mentioned is Common Core, which he opposes. Several stances he has taken on higher education can, however, be found scattered around the Internet.

Back in May, Inside Higher Education ran an interview with economics professor Sam Clovis, who serves as Trump’s policy director. Clovis said that one of the concepts under consideration is to compel colleges to share some of the risk of college loans, usually called the “skin in the game” idea.

Clovis called it “revolutionary,” and indeed it could be. The system of federal aid is built on easy money for almost anyone who wants to give college a try with the schools themselves bearing no risk. The incentives thus created are terrible, but would change if colleges had to factor in the possibility of paying some of the money back if the students can’t meet their debt obligations.

The degree of exposure, Clovis added, would have to be substantial—enough that colleges would change their admission standards and evaluate their academic offerings. He’s right. If colleges had to consider whether they want the risk of losing funds when weak students they admitted later defaulted on their loans, our higher education industry would change dramatically.

Clovis also said that a Trump administration would “take a hard look at the Department of Education,” possibly moving its Office for Civil Rights into the Justice Department. Again, personnel is policy. Extracting OCR from the Education Department and putting it in the Justice Department can’t make things worse, but to make them better, we need people who aren’t imbued with the social engineering mindset.

Finally, what would Trump do about student loans?

This site quotes many of his statements regarding education and here is the first: “A four-year degree today can be expensive enough to create six-figure debt. We can’t forgive these loans, but we should take steps to help students. The big problem is the federal government. There is no reason why the federal government should profit from student loans.”

Perhaps Trump was not aware that the federal government already has ways to help students, such as income-based repayment and targeted loan forgiveness for students who go into “public service” work. Those policies are bad ones that shift the costs of poor educational choices onto the taxpayers.

And what about the notion that the federal government is making a profit from student loans? That’s a myth peddled by the likes of Senator Elizabeth Warren. Higher education analyst Jason Delisle shredded it in this article, calling it “a mix of populist rhetoric and subterfuge.” Interest rates on student loans, he points out, are low and default rates are high. The government isn’t profiting, but taxpayers have to cover a lot of losses on bad loans.

Summing up, the Republican Platform and Trump’s advisor have some policy ideas that would move the nation away from the federal government’s harmful dominance of higher education.