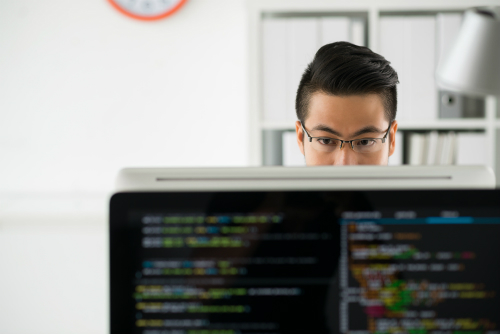 The basement of a once–abandoned tobacco factory may seem to be an odd place to teach the most cutting edge computer technology, but that’s where The Iron Yard, a computer coding academy in Durham, North Carolina, makes its home. It holds classes in the basement of the American Tobacco Campus, a renovated multi-use industrial site where the American Tobacco Factory once manufactured famous cigarette brands like Lucky Strike and Liggett & Myers.

Yet, The Iron Yard’s location does have a certain sense of continuity or symmetry to it. The industrial chic décor, with cement walls and floors, pipes hanging from the ceiling, and glass walls for every room, immediately brings to mind the feeling that this is a place of work, befitting a for-profit school dedicated to providing students with no-frills, nose-to-the-grindstone training intended to lead to a highly skilled job in just a few short months.

The Iron Yard’s students pay $13,900 to attend a rigorous 12-week program, working Monday through Friday in classes of around 15 students. A typical class consists of a lecture component and practice problems. While The Iron Yard nationally offers five different programs, ranging from data science to application design, the Durham location only offers courses on front-end and back-end engineering. (For all the coding illiterate out there—a group in which I count myself—The Iron Yard’s website explains front-end engineering deals with “creating experiences in web browsers that users see and interact with,” while back-end engineering focuses on “the logic and database needs required to run and scale web applications.”)

In order to graduate from the program, students have to create an independent final project, demonstrating the coding skills they learned from the program. According to reviews from former students, The Iron Yard’s teachers tell their students to expect an entry-level salary of around $40,000, which is actually a conservative estimate according to data collected by PayScale.com. Whether they are delivering on that promise is difficult to ascertain.

The Iron Yard is a chain of 22 campuses scattered across the country, the first of which opened in 2012 in Greenville, South Carolina. Coding academies, also known as programming boot camps, are a rapidly emerging market, with over 70 schools in the United States and Canada as of May 2015. Their main draw is the quick completion time, with most programs lasting only a few months, and the promise that students will leave with a junior programmer’s level of knowledge.

Right now, computer programming is a hot career choice, but historically, employment in the field has seen wild swings in demand. In the 90’s the tech industry was booming thanks to the newly realized potential of the Internet. In the new millennium, the dot-com bubble popped and 86,000 people lost their jobs seemingly overnight. Demand was slow to recover, but now, according to some estimates, the market will face a shortage of 1 million computer programmers in the near future.

In order to fill the market gap for coders, coding academies are springing up across the nation. Statistics on coding academies are hard to come by, leading to calls for transparency, but one report states that 10,000 more students enrolled in 2015 than in 2014, an increase of 138 percent.

One such academy, Fullstack Academy in New York City, was founded by Nimit Maru and David Yang. The pair are experienced programmers who thought it’d be fun to teach their passion and mentor rising engineers.

Students taking the main, immersive program learn full-stack Javascript. “Full-stack” is coding jargon for proficiency in both front-end and back-end coding. Fullstack Academy has a rigorous student vetting process, with coding questions appearing on the application. “For every seat we have at Fullstack, we receive 12-15 applications,” Yang said. “We accept about 5-8% of all applicants.”

The Iron Yard has a more “take all comers, survival of the fittest” approach to admissions. Applicants must provide some basic background information, but, according to Stacy Merrick, the Durham Iron Yard media representative, the Iron Yard does “not require students to have any coding experience before taking a course.” In fact, Merrick says most students at the Iron Yard come to the academy with “little to no formal coding education.” While it is not required, most students have previously obtained a bachelor’s degree and have some work experience.

Whether coding academies that rapidly churn out graduates like The Iron Yard and Fullstack Academy are the solution to the need for tech workers is not yet known. Kevin Jeffay, the chairman of the computer science department at the University of North Carolina at Chapel Hill, said in an email that he is intrigued by coding academies. He said he believes creating workers with a very specific skill set isn’t necessarily a bad thing, adding that “we’re not in a one-size-fits-all world and at present there seems to be demand for ‘coders’ across a fairly wide spectrum of coding skills and proficiencies.”

Jeffay added that, since college graduates are more expensive to hire than non-degree-holders, not every company needs college-educated workers for all positions. “Thus, having multiple launching points for entry into the job market is a good thing,” Jeffay suggested.

Yet, despite their potential upside, Jeffay said he is still unsure “whether or not the Iron Yards of the world can demonstrate a value proposition above and beyond that of community colleges or online academies….”

Both Fullstack Academy and the Iron Yard boast high job placement numbers, but some have cautioned that their estimates may not be completely accurate. There is no industry standard for what constitutes a “job,” so many schools include internships and part time jobs in their job placement numbers.

With the world of technology constantly changing, coding academies must strive to stay on the cutting edge. To solve this issue, each Iron Yard location creates a business advisory board. These boards consist of representatives from local tech businesses who give school administrators input on what qualities and skills they are currently seeking in employees. Soltech, a business located in Atlanta, Georgia, is on the advisory board of the local Iron Yard; it is a programming contractor that hires Iron Yard graduates.

Soltech vice-president Veanne Smith said in an over-the-phone interview that they love their Iron Yard employees. “It’s a very intensive course, and if you manage to make it through the three months that shows you’ve got the grit, the determination, and the passion we’re looking for,” says Smith.

Given the brevity of instruction and the very specific subject matter, questions have been raised about whether or not they’re creating well-rounded students. According to Merrick, the purpose of The Iron Yard is not to give students a well-rounded education. “The Iron Yard is designed specifically to prepare students to enter the workforce as junior-level developers after graduation,” she explained. Fullstack’s Yang agrees with this sentiment, saying coding schools are becoming more en vogue largely due to what Yang calls “the unbundling of education,” which allows students to focus on their area of interest by removing general education requirements.

Even as concerns are voiced, for the time being, the number of—and enrollment at—coding academies should continue to grow explosively. From 2014 to 2015 there was a 138 percent increase in graduates. And with students paying a national average of $11,000 in tuition, it’s no surprise that the coding boot camps raked in $172 million in revenue last year. Whether these “unbundlers” prove to be a permanent—and influential—innovation in higher education is anybody’s guess at this point. We will perhaps find out when the software industry again has a glut of technical workers as it has in the past.

Skills Without Frills: The Rise of Coding Academies

Freshman Orientation: Conform or Be Cast Out